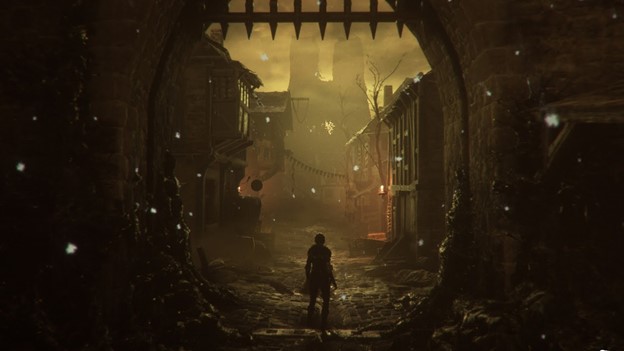 During the month of October, gamers love to scare the pants off themselves by sinking into grim worlds of horror. Luckily, the horror game genre is filled to the brim with classics ranging from solo outings like Alien: Isolation and Resident Evil Village to recent multiplayer experiences like Dead by Daylight and Phasmophobia. But all of these titles tend to deal with supernatural fears, such as zombies, aliens, and ghosts.

Very rarely do horror games choose to explore real-world horrors. But every now and then, a game will attempt to drum up real fear by blending history and horror. In 2019, one bold game developer did exactly this, venturing into the past and introduced players to A Plague Tale: Innocence.

What Is A Plague Tale: Innocence? A Plague Tale: Innocence is categorized by gamers as an action-adventure stealth game with horror elements and is set in 14th century Aquitaine, France, during the Hundred Years War. The game features protagonists Amicia de Rune and her young brother Hugo who must flee from soldiers of the French Revolution while avoiding hordes of diseased rats carrying the Bubonic plague. The game gained notoriety for being set during the Black Plague, which has been relatively unexplored in gaming. Naturally, the gameplay featured within A Plague Tale: Innocence is a mix of stealth, action-adventure, and horror. Playing as a young woman in a world filled with death at every corner, the player must tread carefully. This isn’t some run ‘n gun shooter, and players will spend most of the game avoiding Inquisition soldiers and diseased rats while protecting Amicia’s younger brother from the constant dangers. While the game will occasionally feature a sense of adventure, most of the game feels horror-inspired and leans more into stealth and horror over combat.

Playing as the young Amicia de Rune, players are limited quite a bit when it comes to combat. While she is not completely helpless, her abilities are limited. Her main weapon is a sling, which she uses to throw rocks at enemies to stun (and occasionally kill) them. The sling also comes in handy to distract foes, break locks, and hit distant targets. It is more often used as a last resort and isn’t a very effective tool for fighting. More often than not, Amicia will use her cunning to complete puzzles and stealthily evade rats and other enemies. There’s a fair amount of variety in these encounters, though at a point, they can feel a bit repetitive later in the game. I honestly never thought that I would ever describe the Black Plague as something beautiful, but Innocence sure makes it visually appealing. It’s one of the prettiest games that I’ve enjoyed and allows the player to see the Plague-stricken world of medieval France in visceral detail. Everything from rat-infested alleyways to broody forests is rich with detail, to a stomach-churning level in some cases. The game does not hold back on gore and hyper-real violence, so it is not for the faint of heart.

The sound design of the game is also excellent. I can still hear the sound of rats devouring human flesh and scurrying about in my head. The game’s audio cues are all perfectly done, and even simple ambient sounds of the world are great. Innocence’s visuals and sound are both incredibly well done, and help to elevate the game to a higher caliber than most other horror games in terms of production quality.

While A Plague Tale: Innocence feels historically authentic on its surface, playing more than a few minutes reveals that it is far from accurate to history in many different ways. For one, the game is built around the idea of hordes of man-eating rats literally decimating entire towns and villages. In addition to infecting people with disease, the rats literally eat humans alive, which is an honestly ridiculous concept. However, it makes for scary visuals and interesting gameplay, but historians know that this is obviously an exaggerated version of the real Bubonic Plague.

Of course, at the end of the day, A Plague Tale: Innocence doesn’t need to be 100% accurate to history. Being a video game, Innocence is fully allowed to take its creative liberties and embellish in order to make for a more exciting experience for players. The game’s setting feels authentic enough, and sets the right tone to make for a horrific, historically inspired video game that is sure to scratch the itch of Black Plague history buffs (even though it can feel downright silly at times).

All in all, if you’re a horror lover who also happens to enjoy medieval history and doesn’t mind inaccuracies, then you’ll likely have a great time with A Plague Tale: Innocence. The game features fun stealth gameplay, a truly horrifying atmosphere, near-perfect sound design, and great graphics. If you can get past the game’s inaccurate depiction of the Black Plague and overly dramatic story, then you should have no problem enjoying this scary title. If you’ve already experienced Innocence and are looking for more Black Plague horror, then you’re in luck. Since its release, Asobo Studio has announced that a sequel–entitled A Plague Tale: Requiem— is in the works. Set after the events of Innocence, the sequel continues the story of Amicia and Hugo in their continued escape from the dangers of a plagued world. The game will release on current-generation systems in 2022, and judging by the official E3 announcement trailer, the game looks excellent.