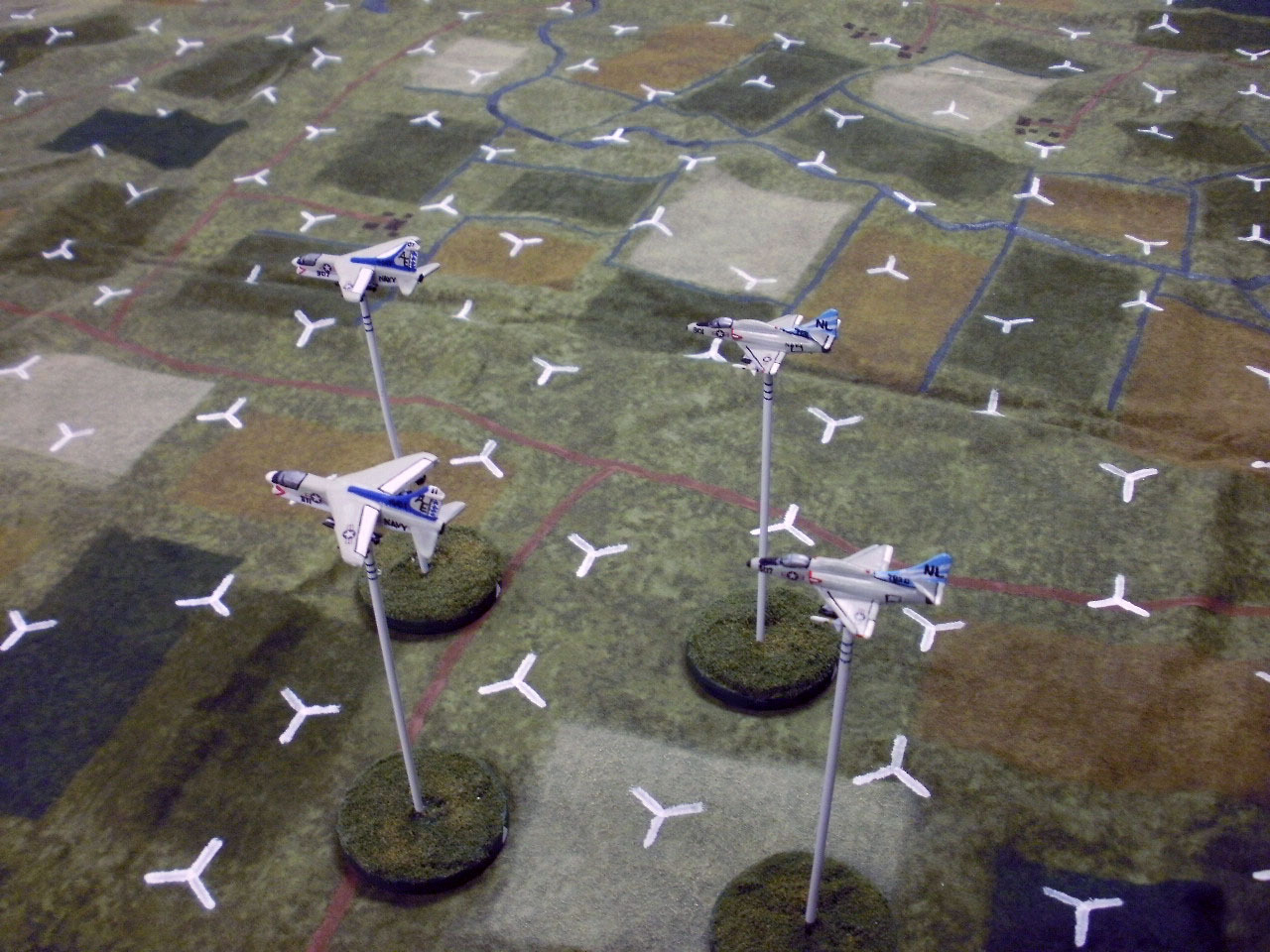 As I am more visual in my learning, I tend to be more comfortable with this version of air gaming since I can see the attitude and altitude of my aircraft and what I want and need it to do.

To me, it’s just easier to represent all of those changes in miniature, as you can see above.

The Check Your Six series is, to me, the best air miniatures rules out there. The games cover all the aspects of aerial warfare from World War II to the present day, and they do it in a simple, playable manner. I learned the rules in a few hours, with aircraft like Blue Max, a menu of maneuvers to choose from, and then being able to select from them dependant on the aircraft’s current speed, condition, and pilot’s skill. The game can also easily handle large fights and has spawned over a dozen scenario books, with more coming. It even spawned a computer game set in the Battle of Britain. Campaigns are also a snap to run in this system, and I really cannot say enough good things about these rules.

I like the fact that the game is simple, and it does so much so simply. There’s a lot to be said for this game, and I encourage everyone to give it a try. I know I am frantically building aircraft for it.

This was the set of WWI air combat rules at my old club in New York. It was a rather good game, even if I used to complain my machine guns jammed entirely too much. The game did a lot simpler, and you didn’t need to know complex math to play. The game ran off a simple log sheet and was percentile-based, which helped figuring out the odds immensely for me. But it had rules for every aspect of air combat. No rules for trench strafing, but we managed to come up with something. And yes, it made each aircraft have a personality with a few simple rules, such as the dreaded “prop hang” for the Fokker Triplane! I don’t know if Metro Wargames still runs this game, as the primary guy that was into it passed away some years ago, and I’ve lost touch with the membership, but I hope they do. It was a fun little game, and it had a lot of good aspects to it. My only complaint - memory doesn’t serve to remind me if there were pilot quality rules in the game. While the rules are out of print, they’re still available via Board Game Geek for a very reasonable price.

Bag the Hun is Too Fat Lardies entry into the crowded air combat field. And like Check Your Six, it’s very pilot quality dependent and simple to play. It also encourages players to stay close to their wingman. One thing that may make it inaccessible for most American wargamers is that it uses a card system to determine initiative. I personally don’t have a problem with this, but sometimes, when you’re looking for folks to game with and none of them will play this, but they will play Check Your Six, guess what you’re left with? I haven’t played the game yet myself, so I can’t say much more than I have, but a friend is getting the planes and materials together to run a game, so I’ll give it a shot and do a more in-depth review then.

Blood Red Skies has taken the aerial wargaming world by storm. With Warlord Games behind it and pushing out packs of related miniatures (in the somewhat odd 1/200 scale, not a common scale for most air wargaming these days), the game has become a staple at many cons and for people who want a simple, fast-moving “stick and rudder” game. The game is card-driven in a way, but it’s not dominating orders of movement but presents information to players simply and inserts some “period and theatre flavor.”

While I haven’t had a chance to play the game myself, On Tabletop’s Let’s Play has a wonderful playthrough I consulted when writing this. I have a friend who’s painting planes (including for Korea), and I am looking forward to trying it when we’re all able to get out more.

I like how it concentrates on the basics of advantaged, disadvantaged, and neutral to start the game. I wish there was a bit more chrome, like Check Your 6, but I’ll take what I can get.

What’s really nice is that Warlord is giving out a free copy of the starter rules for you to get an idea of what you’re in for. It can be downloaded here.

Wings of Glory is another simple beer and pretzels air combat game, with maneuver cards determining your ability to move and fight against other aircraft. This is a popular form of simulating air combat, with other games like the board game Down In Flames famously making use of a similar system. What makes the Wings of Glory system so unique is the 1:144th scale miniatures put out for the game to cover both the 1st and 2nd World Wars.

The game is simple, and the planes are well-reflected. If things are a bit simplified, I will admit, I have had a ton of fun playing the World War I version, and it plays a lot like a WWI dogfight should in my mind. I have yet to play the World War II version, but I’d like to.

Aerial Wargaming is a huge untapped segment of the hobby, even with the special basing requirements for miniatures or the (necessary) suspension of disbelief of doing 3-D on a 2-D board for board gaming. That said, I’ve spent many enjoyable hours maneuvering for my life or trying to get that lead angle on an elusive target. I can encourage folks to take to the skies, so to speak. My advice? Start small and build from there. There’s a ton of options out there, miniature-wise, from 1/600 scale all the way to 1/72 (though at the larger scales, smaller fights are a necessity).

Whatever you choose, make sure you have fun doing it.