How to Get Miniature Gaming Mileage Out of Old Role-Playing Games! 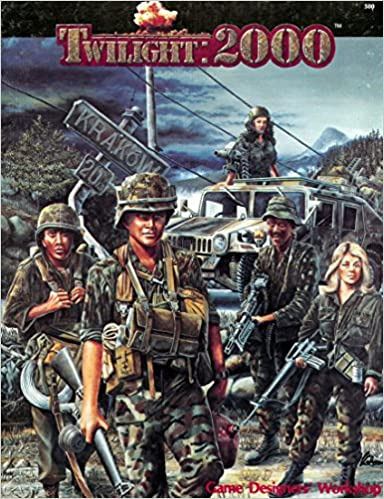 I have been a wargamer since 1983 and a role player since 1985, and the truth is, no game was as formative to my gaming “zeitgeist” as it were, as was Twilight:2000. Why is this so? Because first, the timing of the game was excellent. The Cold War was in full swing, and Ronald Reagan was hell-bent on beating the Soviets, and it seemed to many, damned the cost. With movies like Threads, The Day After, and Testament being made, it seemed NATO and the Warsaw Pact might very well come to blows.

Or at least it did to this 10-year-old growing up in Gaithersburg, MD, which is a stone’s throw from Washington DC. Maybe it was my subconscious need to make sense of it all. Maybe I wanted to play something other than sword and sandal RPGs. I just wasn’t that into that sort of thing? Well, come one day, I was reading Analog magazine, and I read a review of Twilight:2000. I was hooked. I got the game as a birthday present that next summer and collected pretty much everything that came out for the game until GDW folded up shop in 1993, but here I was, plenty of books and a fertile ground of ideas…what to do with it, right?

I was fortunate in that the game has had something of a bias towards miniatures since the beginning. In fact, a set of Twilight:2000 miniatures rules were published in Challenge Issue 25, which was GDW’s house magazine for its RPGs. (The rules had a very proto-Command Decision feel and could be its predecessor.)

Furthermore, the game had an official line of miniatures (by Grenadier Miniatures, long OOP), but if you look hard at convention flea markets (bring and buys to our British cousins), you’ll still find from time to time a supply of the figures usually in lots of 6 or 8 packs of figures. The miniatures themselves are a bit smallish compared to some 20mm lines (Britannia comes to mind), but they’ll fit in well with some others, like Ehliem, and they have some nice poses and sculpts.

And if that wasn’t enough? GDW published the US Army Vehicle Guide, which had an entire section, and black and white pictorial on just how to use Roco and Roskopf vehicles with your figures (not to mention how to make conversions of some of the harder to find stuff). Dated stuff today, but the pictures are a real bit of inspiration on how a gaming table for Twilight:2000 should look.

So, this all inspired the beginnings of my blog. I’d done some stuff for Twilight:2000 before, on the late, lamented Guild Wargamers forum. (which was a real boon for all things 20mm) and I wanted to write a blog to tell those small group of souls that “Good Luck, You’re Not Alone” in this crazy subset of a subset of a hobby, and with all this Cold War Gone Hot nostalgia going around (Down in front, Team Yankee!), I thought, “perfect time for a blog, right?”

So thus, “500 Miles to the German Border” was born. I was prolific my first year and wrote a wargaming-focused analysis on everything that could be of use to the Twilight: 2000 gamer. I think my best stuff has been my writeups of the various role-playing modules as suitable miniature wargaming scenario material, but I have found my blog being quoted in a lot of places, including The Miniatures Page, and even some Twilight:2000 role-playing pages as they mine it back for ideas.

This is just my own experience, really, but honestly? There’re tons of older RPGs out there, collecting dust and not being played, but they’re chock full of ideas that await the application of your favorite miniatures rules sets(s). But the best advice I can give is the following.

So, what does all this mean for the miniatures gamer who is looking to crack open a “dead” RPG for inspiration? Well, there’s a fertile ground out there. You’d be surprised what you can find, and honestly, a few throwaway sentences buried in an adventure can be the basis of a great scenario or two for the tabletop.

And that’s the final point, do something that makes you want to write about it. Blog writing for miniature wargaming should never be a chore. And be consistent, if not prolific, once or twice a month for a posting schedule is pretty good and will keep your fans satisfied for the most part. And do not be afraid to ask your audience occasionally what they’d like to see. You’d be surprised as to what they might come up with.

So, how is this Not Another Third World War?

As you’ve read from the sidebar, Twilight: 2000 wasn’t a game that posited the usual what I call “Soviet Sunday Drive to the Rhine.” Instead, the Warsaw Pact was on the defensive for most of the game’s background (which can make for some interesting games for all those 6mm types, as all the vehicle guides have HELPFUL information on TOEs). Also, with the end of the Cold War, there are tons of declassified materials you can mine for orders of battle, scenario ideas, and a whole host of other things. (And EpochXperience can help you with that, we’ve got a lot of archival experience!)

By the time 2000 rolls around, you have a background that has some of the bells and whistles left, but not all. What’s striking and fun is the dichotomy. Horse Cav with GPMG and ATGM, MBTs running on hooch and different uniforms even within the same unit. And you can steal ideas from Mad Max, Day After, or dare I say it? Threads? (There is a certain traffic warden that would look awesome in 20mm, and Ehliem makes a nice figure that would make a great starting point. Crooked Dice also makes him in 28mm!). All of this is a historical zeitgeist of the 1980s, where we were pretty convinced the Cold War was going to end with a bang and not a whimper. It left a big impression on my life.

What’s also nice? If you like infantry heavy games? This milieu is for you. As I said before, there’s some ironmongery, but not a lot. And for the modelers? The fact there is fewer vehicles and heavy weapons means you can let your imaginations run riot and really personalize your AFVs and other vehicles, as the “gypsy caravan” look is very, very in Twilight: 2000.

So, there is a rich tapestry out there for a 35-year-old RPG and plenty of 15 and 20mm figures out there to paint up for it. Why not give it a try?

Twilight:2000 burst onto the scene in November 1984 in a period of high tension during the Cold War. It took a then likely East-West confrontation and turned it into good RPG fodder, with some historical allegory to the Thirty Years War (with Poland standing in for Germany).

The game’s initial background posited a Soviet invasion of China after escalating border tensions in the then-future of 1995. This distracted the Soviet Union, and West Germany, in cooperation with East Germany, moved to kick the Soviets out of East Germany by force of arms. This naturally went badly, and expanded into a Third World War that pulled NATO and the Warsaw Pact. The second edition of the game was printed in 1990 and changed the flashpoint to German/Polish border issues in Western Poland and ethnic Germans in Silesia, and the 2.2 edition of the game was published in 1993, just before GDW folded and changed the timeline again, this time positing a successful hardliner coup in 1991.

The game, while a bit dated, still has something of a following and was even an attempt to bring the game back as Twilight: 2013 in 2008, to mixed reviews, and the game still has a small but fanatically loyal fanbase as the story of soldiers lost, far from home in a post-apocalyptic landscape has had something of an appeal since the story of Xenophon.