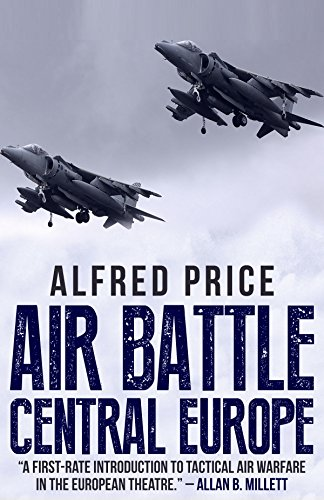 One of the oft-heard jokes amongst the USAF in the 1980s went a little something like this – two Soviet generals are touring an occupied Paris after a Third World War. One turns to the other and asks “So, comrade, who won the air war?” Jokes aside, for 40-odd years, the two power blocs stared at each other, expecting the worst and doing their best to prepare for it.

The truth was, is that the air dimension in any “war that never was” would have been very important and would have, of course, played its part in defeating a potential Soviet invasion of Western Europe. In the book, we get a great look at what the defense of Europe and what a potential Third World War in the air might have looked like in the mid-1980s. We specifically look at the region 2 Allied Tactical Air Force (or 2 ATAF as it was often referred to) was responsible for, which ranged from just north of the city of Kassel to the Dutch-German border. If the war had come, this region would probably have been the cockpit of some of the worst fighting, as it offered the best tank country and hosted some of the weaker forces in NATO.

The author himself is a former RAF aircrewman with over 4,000 hours, and his experience shows in the pages of this book. We get interviews with everyone from the head of 2ATAF to aircrew in the frontline squadrons. If war came, they would have been the ones expected to accomplish their missions against an air defense system that would have made the skies over Hanoi look safe by comparison.

The book starts with a mock communique that gives an overview of what might have happened if war had come. I first read the book in 1988, and it chilled me to the bone then. The chapters are broken up, beginning with the interview with the then commander of 2ATAF, who candidly talks about what “day one” of what such a war would have been like and how he expects he would have had to fight it.

We then meet pilots in squadrons representative of each role of aircraft on the modern battlefield. This includes deep strike aircraft, who would be penetrating deep into East Germany and Poland to hit airfields, POL dumps and the like; fighters who would try to keep the skies clear of MiGs and Sukhois; and reconnaissance aircraft, close air support, and the whole gamut. We even get the view from the ground, talking with the head of Northern Army Group (also known as NORTHAG) for his perspective on how airpower would be integrated into his defensive plans.

All the interviewees are candid with Mr. Price, and we see that many of these aircrews were rather convinced that war with the Soviets was unlikely, and if it did occur, it would be about the worst thing that could happen. Some had even met average Soviet citizens and had a sense of who they were as people. But that said, you also get the feeling that come what may, they were professionals ready to do their duty as needed.

What Use is this Book to a Wargamer?

A lot. This book gives a great snapshot of what the air dimension looked like in the 1980s and into the early 1990s. Much of the technology and aircraft described in the pages of this book saw service in Desert Storm against an Iraqi enemy who had been schooled in the same integrated air defense network the Soviets would have used in Europe had war come.

Moreover, if you game out the aerial dimension of “the war that never was” using, say, the Air Power or Flight Leader system, then you’d find tons of potential scenario fodder in the pages of this book. I really enjoyed the in-depth discussion of “how we’d try to do this if war came.” It’s very eye-opening to see the attitudes of the aircrews, how they approached their missions, potential targets, and the ordnance and tactics they hoped to employ if the worst happened. Of course, there’s also tons of scenario fodder for Red Storm as well.

I highly recommend this book for any modern air gamer, especially those with interest in the 1980s period of the Cold War period. It more than earned its five out of five stars from me.

The book is readily available on Kindle or in paperback. You can get it used in hardcover, but it’s a bit pricy.