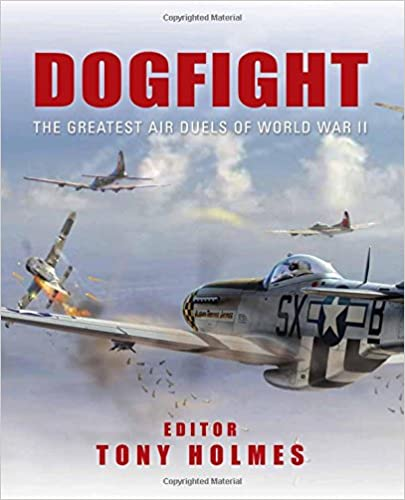 Published in 2012 by Osprey Publishing

Osprey Publishing has the wonderful habit of occasionally releasing omnibus editions of some of their book series in one volume. It does make collecting information easier as it’s all in one place. Dogfight is one of those editions, and if you’re getting into WWII air gaming, it’s not a bad book to get. You get the following books in the Duel series under one cover:

I really like this practice as well. Being one getting started In air gaming myself, it’s a great resource that takes two aircraft that actually faced each other in battle, and, using real-life encounters and reports, walks you through how these aircraft fared against each other in actual combat. While most of the collection here is the usual stuff - Battle of Britain and the skies over Europe - to me, the standouts are the China and Pacific parts of the book. I loved reading the encounters the Seafire (A Spitfire modified by the Royal Navy to operate off of carriers) had with the titular Japanese fighter of the war, the A6M Zero. You don’t read of a lot of encounters between Spitfires and Zeroes, the most notable in my mind is the skies over Darwin and the Dutch East Indies in 1943.

What you get with the books is the usual excellent art and graphic work Osprey puts together to bring the aircraft to life. The books go into such details about the aircraft, including their development history, their performance, and, more importantly, the training approach of the two sides when it came to pilots. And these discussions are quite detailed. I didn’t know much about Japanese pilot training before I read this. I knew It was selective, but apparently, it was even tougher than I thought.

The discussions on tactics are also well done and relate to the aircraft types. What I also liked is that the aircraft are ones most gamers are going to want to know about for air warfare projects. Even if you’re a board wargamer, you can crib this thing for scenarios.

Another thing I happen to like about this book is that it’s just so well laid out. The text is clear and easy to read, and when you’re nearing 50 like me? It helps. You even get graphics of what the cockpit looked like and a “view through the gunsight” that really gives you an idea of the relative cockpit visibility and workload one found in each aircraft. These human factors do matter in air combat, and Osprey did a nice job laying these things out here.

Osprey excelled in describe how these aircraft were used in the context of the larger campaign. I especially liked the way the Battle of Britain chapter had sections on the British Air Defense system in 1940, and how it worked, and how the RAF decided when and where to intercept incoming bomber formations.

We even get short capsule histories of some of the more talented aces, encapsulated in infoboxes helpfully spread around the text.

Why I found the two Pacific books so compelling to me was twofold:

First, the Ki-43 facing off against the much-maligned P-40 where the P-40 held its own until almost 1945 was an interesting story. On paper, the Ki-43 could fly rings around the P-40, but the Japanese Army Air Force was raiding China for pilots with any talent, and thus the China-based squadrons got worse and worse. Moreover, the P-40s improved from the much-maligned early war victim of Japanese fighters to a half-decent aircraft that, used properly, could use its six .50 caliber machine guns to devastating effect.

Second, as I stated earlier, I really enjoyed reading about the Royal Navy’s operations off of the Japanese mainland in the Seafires versus Zero book. We don’t read much about that in the U.S., particularly how Seafires and A6Ms faced each other. Most British carrier aircraft by 1945 were American-made, provided under Lend-Lease, so it was interesting to see the star of the Battle of Britain come full circle.

So, to me, this omnibus does a great job of fulfilling its purpose. I think it’s an excellent buy for any air wargamer, and it’s available on Amazon in hardback for a steal. I would not waste time and pick up the book if you don’t already have the five component books separately, as it’s a great value for the price.

As Always, Good Gaming, Everyone.