How Supermassive Games Tapped the Mythos of History for Horror Tales Supermassive Games has had a rather large presence on PlayStation over the past decade, with the developer assisting in the creation of games such as LittleBigPlanet and its sequels and Killzone HD. But Supermassive really sent players spinning when it decided to leave behind the bright and happy world of Sackboy and tackle something a bit dark. Released exclusively on the PS4, Until Dawn saw Supermassive tackling a story-driven interactive horror drama that paid homage to classic horror films like Evil Dead, The Texas Chainsaw Massacre, and Friday the 13th. While successful, the development team had another terrifying trick up its sleeve when it announced the Dark Pictures Anthology, a series of eight games modeled after Until Dawn’s gameplay.

While horror is at the forefront of the anthology, after the first game, Man of Medan, released, a trend came to light – the games, while steeped in the supernatural, were showing links to historical legends and spooky tales. This idea was solidified even further with the launch of Little Hope, a game that was largely linked to the witch trials of the late 17th century. As the series progresses, the ties to history become more evident, and it’s hard not to admire how Supermassive Games has dug into the past to create these unsettling, fright-filled experiences. 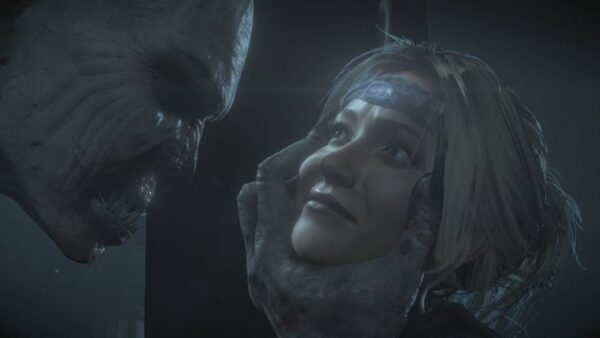 Known for proving Supermassive Games wasn’t exclusive to bright and happy worlds, Until Dawn is generally known for its excellent cast of motion-captured characters, the story’s branching paths, and the game-changing butterfly effect system. But one aspect of the game that is rarely talked about is that it’s inspired by real historical myths and legends.

(Be wary, a spoiler lies ahead!)

The wendigos featured in Until Dawn as one of the main antagonists come directly from Native American legends. The creatures are described as being once humans who’ve mutated into ferocious monsters after getting a taste of human flesh. The legends originated from the First Nation Tribes, which dates all the way back to the 1400s. How one becomes a wendigo (or “windigo”) varies depending on the region, but Supermassive’s version is one passed down from generation to generation. Other versions of the tale claim greed and selfishness will turn one into a wendigo, which, some may argue, is on par with resorting to cannibalism. For the Algonquian-speaking First Nations, an individual is turned when their spirit becomes corrupted or is weakened by the elements. The first entry into The Dark Pictures Anthology is an interesting one, to be sure. Titled Man of Medan, the game’s story is heavily inspired by a legendary ghost ship. The tale dates back to the 1940s, where an American crew called the Silver Star received a distress message while navigating the Straights of Malacca. The distress signal that they received read: “S.O.S. from Ourang Medan. We float. All officers, including the captain dead in chartroom and on the bridge. Probably whole of crew dead.” What followed were a series of indecipherable morse code beatings, followed by two final words: “I die.”

In response to its distress signal, the Silver Star showed up at the Ourang Medan. What the crew found was unbelievable. To their shock and awe, they found every crew member of the Ourang Medan, including the ship’s dog, dead. All bodies were facing up, staring at the sky or ceiling with their eyes and mouths wide open. The crew of the Silver Star attempted to tow the ship to port, but before they managed to do so, the Ourang Medan became engulfed in flames and exploded, sinking to the bottom of the ocean. Man of Medan takes this old legend and puts a creative spin on it, sending a group of friends to the South Pacific to explore the still-floating remains of the World War II-era SS Ourang Medan. Aboard the haunting vessel, players unravel the secrets of the boat and the surprising downfall of its crew. The second release of The Dark Pictures Anthology, Little Hope is more rooted in history than its predecessor. The game follows the 17th-century American witch trials and their close ties to American Colonialism. Though most are familiar with the Salem Witch Trials, Little Hope instead focuses on the lesser-known Andover Witch Trials, which were worse in many ways. The game jumps back and forth between three different times: 1692, 1972, and the present day, as players experience flashbacks to the executions and witness the tragic ends to the townspeople in 1972. Overall, Little Hope features a haunting story that takes plenty of inspiration from actual history. House of Ashes, which releases October 22, is the third entry of The Dark Pictures Anthology series. While we can’t say too much about its overall story yet, we do know that it takes place during the end of the Iraq War and follows a group of Special Forces soldiers who stumble upon a buried Sumerian temple. To the soldiers’ dismay, they find that the temple contains unearthly creatures, many of which we suspect will be pulled right from Sumerian legend. It’s refreshing to see a horror story that manages to connect the horrors of war with that of ancient Mesopotamian history.

With five more titles left in The Dark Pictures Anthology, there are many places and times Supermassive Games can go. As its current trilogy found inspiration in history, it’s safe to assume that future titles will do the same.