The M-1 Tank in Hex and Counter Wargaming, a Retrospective 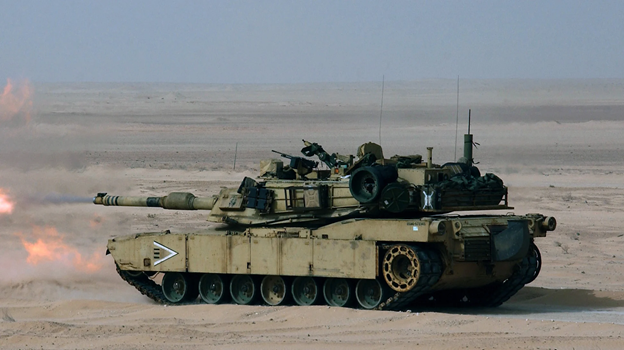 It’s hard to believe the M-1 is forty years old. I can dimly remember when I was six how this tank was the butt of a lot of Andy Rooney jokes. The tank, however, acquitted itself well in Desert Storm and the conflicts since. I thought, considering I am a contemporary of this vehicle that has appeared in a lot of board games, why not write about the tank’s role in the board games I have played and where it fits into the larger whole?

The M-1 was one of the centerpieces of the American military renaissance of the 1980s. It was designed to fight the Soviet Army in a war that never was and ended up fighting an enemy that may have used some of the same equipment but was motivated by very different things.

Seems reasonable, right? Or at least a good idea for an article?

So, let’s get started.

The M-1 had just entered service in 1979, and the first vehicles arriving in US Army Europe in 1982 when the first game in the series, Assault, was published by Game Designers Workshop less than a year later. In the game, the M1 pretty much towered over most of the other vehicles in the game. Like Panzer Leader and Panzerblitz, each counter represented a platoon of between 3-5 actual vehicles (an M-1 platoon was and still is four vehicles). The rest of the games in the series were released between 1984 and 1988, the last in the series being Chieftain, which covered the British and Dutch armies.

The M-1 depicted here is the M-1 model with 105 mm gun and the basic armor and gunfire control system package. Its advantages in the game are:

If you consult the game charts, while the Soviet gun has a slightly better penetration overall over the American 105mm armed M-1? The M-1 has both a range advantage and a rate of fire advantage. All these things proved to be remarkably prescient once the Cold War ended and the real T-80 was put through its paces by NATO. It turned out it was a better tank than feared, and 105mm armed NATO tanks would have had a real problem killing T-80s front on at normal engagement ranges. Eventually, the M-1 was up-gunned in the M1A1 model and sported the now ubiquitous 120mm Rheinmetall gun. (The M1A1 never appeared in Assault, by the way).

As for how it compared to other NATO Tanks in the game? The British Chieftains and Challengers were better armored but slower. The Leopard 2 was just as fast and better armored on the flank.

MBT (Shorthand for Main Battle Tank) was first released by Avalon Hill in 1989 at the very end of the Cold War. The game benefited from some better information about the T-72 and T-80 by this time, but the game was still firmly rooted in the 1980s and the M-1 ruled the roost in many of the defense journals of the time. Heck, it is even the featured tank on the cover of both versions of the game!

The M-1 in the first edition was not the balanced system we saw in Assault and came in the M-1, IPM1, and M1A1 variants. The M1A1 in MBT is the American answer to Ivan Drago. “Whatever it hits, it destroys” (which is what it did in real life during the Persian Gulf War). But it didn’t exactly make for an interesting game when the Soviet players literally had no chance of killing it from the front, and there was no randomizer for armor penetration.

The newer GMT version, thankfully, fixes all that and makes the M-1A1 a fare more balanced vehicle with a better understanding of its foibles. The M-1 was and still is a great tank, but invincible it is not.

The counters are also better looking and with a lot more information on them than the older Avalon Hill version. The data sheets are also more understandable, and all in all, it’s a better game.

The M-1s in Fire Team were probably a bit out of their depth here. The game was a squad-based game where the scale is 80 meters to the hex. An M-1 in this scale (and considering the game designer identified this vehicle as the M1A1 with the 120mm) would realistically be shooting the length of the game board!

The vehicle as rated in the game is a killer, and it should be at this scale, as the ranges depicted in Fire Team are murderously close. Probably closer than most M-1 crews would have wanted to get to any potential enemy vehicles.

This modern offshoot of the Tactical Combat Series is a hidden gem, in my opinion, and while it’s a complex game to play, if you want to have an experience of what actually planning an operation can be like, give this game a try. It’s a shame Force Eagle’s War was something of an evolutionary dead end, as it were. MMP, the current owner of the TCS line, has not made any of the updates for the TCS rules compatible with the game.

That said, the M1 in this game is the M1A1 and is one of the best tanks in the game. It’s faster, better armored, and hits harder than the T-80 in this game.

I can’t say I’ve played any more recent games of the fighting in Iraq or Afghanistan involving M1s, nor have I seen many games featuring them. I have seen a few conversions of older games to cover situations involving Desert Storm, usually MBT or Assault. In operational games, the M-1 is usually abstracted into the combat factors of their parent unit, but M-1 armed units tend to be rated higher than most units in each game.

The M-1 has soldiered on for forty years and shows no sign of slowing down. It will probably be in service for at least another twenty years at the current rate of development.

And with that, Good Gaming, Everyone.