How Accurate Should Your Historical Map Be? When developing a historically authentic video game, many indie developers often concern themselves with ensuring the world’s architecture, character dialects, clothing, and weaponry align with the history they’re tied to. These are some of the most common elements that game designers focus on when attempting to make their worlds believable, but as a result, some other elements can get sidelined. One such element is the game’s world map.

A game’s world map is honestly one of the most important aspects of a game, as it is what the player will spend their time exploring and is essentially what defines a game’s identity. No matter how authentic feeling a game’s characters and their clothing, weapons, and dialects might be, if the world itself doesn’t feel right for the time, then the entire experience can fall apart as a result

Should a Map be to Scale? 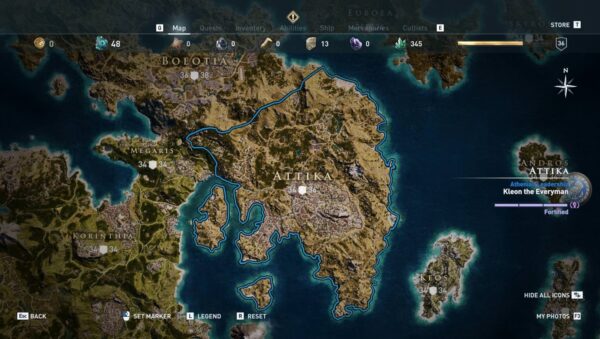 While it’s certainly important for video games that take place in a real-world environment to have some resemblance to their counterparts, do they truly have to be entirely to scale? In short, no. While games most need to replicate real-world locations to draw players in, games can’t truly make a world entirely to scale.

If games were created entirely “to scale,” they likely would be overly large, take forever to traverse, and, quite frankly, be incredibly boring. Who wants to take five in-game hours to go from one game city to the next? Not very many, we’d imagine. But there are ways that game developers have fixed this issue while still remaining authentic.

Feature Familiar Landmarks, but Exclude Others Game maps should be easy to navigate and not so big they’re a chore. After all, video games are intended to be fun, so by creating a world that is varied and easily explorable, the player will find exploration exciting and fun rather than feeling like a chore.

Because of this, game maps for historical video games should feature the most important landmarks from their respective regions while excluding some other less notable areas. This should be done to allow the player to more easily navigate a game’s world and keep the world at a manageable size. If the world was entirely to scale, the gamer would quickly become overwhelmed and probably get lost far more easily. Many game developers will often do just this. They feature the most exciting and interesting parts of an area and remove a lot of the uninteresting landmass that is empty or lacks anything worth seeing.

Assassin’s Creed Origins is an excellent example of this. Taking place in Ancient Egypt, Origins features loads of different locations to explore including ancient pyramids, tombs, and cities, with many of them exactly to scale (and some even larger) than their real-world counterparts. However, the country of Egypt itself is far smaller than the real world map. To be more specific, everything is much smaller in-game than in the real counterparts. When measured out, it was found that Origins is 80 sq km in total. In reality, Egypt is over one million sq km large, with the majority of it being.

Clearly, Assassin’s Creed Origins is better off not being historically accurate in its size as gamers would have to spend literally days traversing the map in real-time before finding anything of interest in many cases. Historical game maps need to strike a good balance between authenticity and accuracy; if a game map is too accurate to the real world map, gamers will wind up bored and uninterested. If a game map takes too many liberties by either removing too much of the map or changing too much in order to make it “more interesting,” then it can run the risk of no longer being recognizable and no longer feel like an authentic historical gaming experience.

Even games set within fantasy worlds, such as The Elder Scrolls V: Skyrim, have also done a great job at this despite being set in fictional universes. Skyrim features a massive world filled with caves, dungeons, cities, and villages in every corner. The game contains an endless amount of unique areas to explore, all of which are separated by wilderness and wildlife, and feel spaced out from each other just enough to feel natural, but not so far apart that traversal feels boring.

Historical games’ maps need to fall somewhere in between by successfully adjusting their world just enough to make for a great gaming experience while still feeling very authentic. But whether you’re playing a game with a map based on the real world or one that’s entirely fictional, finding a good balance between authenticity and accuracy is integral to creating a game world that is believable, well-paced, and most importantly, fun to explore.