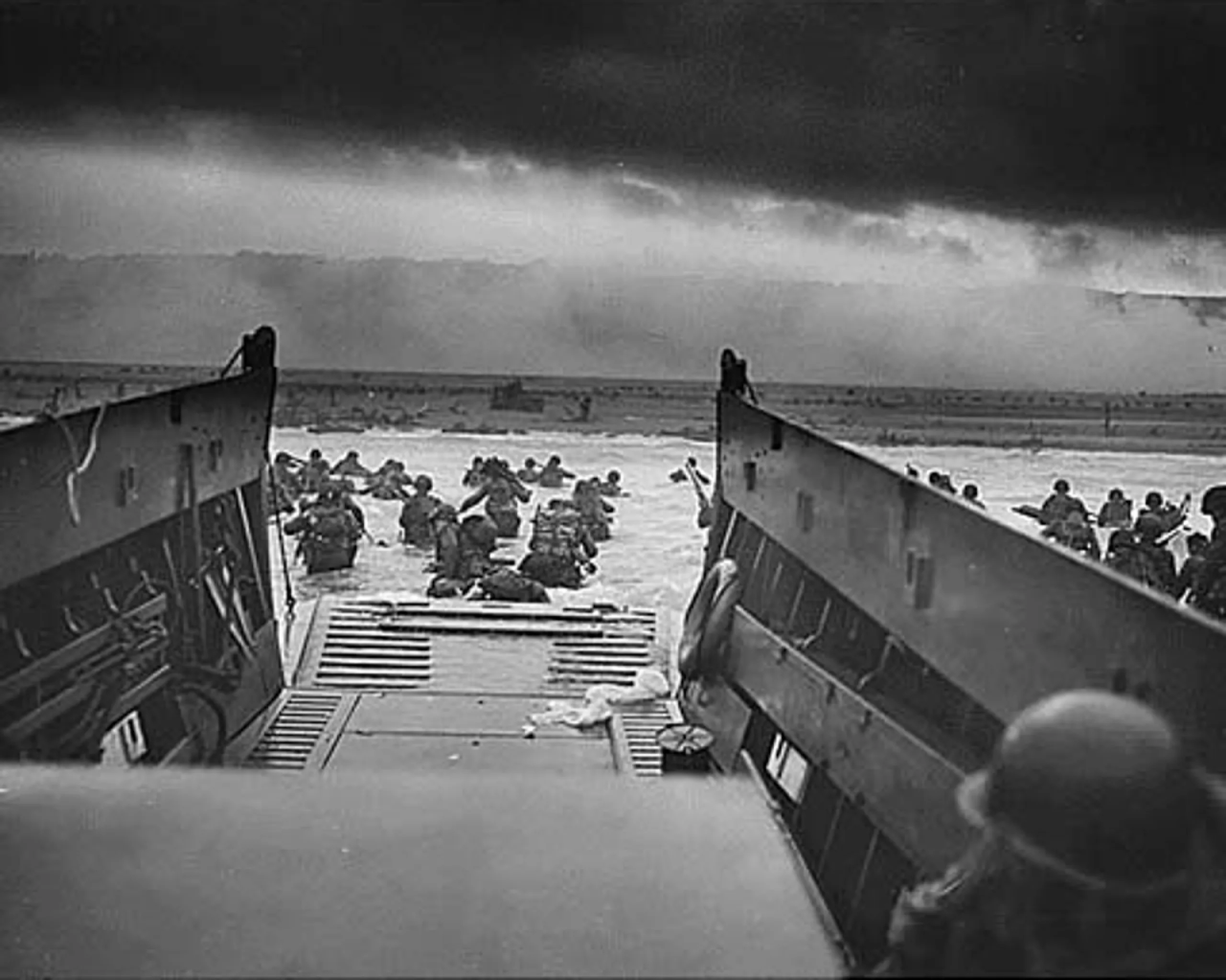 D-Day is one of those “pivots of history” that did decide the fate of a lot of things. Western Civilization, the shape of post-war Europe, and so on. It was also the final nail in the coffin for Nazi Germany. While that coffin had been under construction for some time – with much of the bloody work completed by the Soviet Army – the importance of D-Day was twofold. One, it returned the forces of the Western powers to the continent of Europe, and two, it allowed those forces to come to grips with significant German forces for the first time and destroy them in a decisive battle.

There’s been a lot of wargaming ink spilled about D-Day. It’s probably one of the most gamed parts of World War II. I’d say every major convention I go to has at least one or more beach landing games, usually based on the graphic (and pretty historically accurate) sequence seen on Saving Private Ryan. The fact is, not all of D-Day was like Omaha. In fact, resistance was light on most beaches, mainly because the Germans were expecting an Allied landing on the Pas De Calais.

But people want to game this important campaign out, and it’s got a lot going for it – from big splashy beach landings to skirmishes over Norman hedgerows. It has it all. I’m not going to attempt to cover EVERY item that ever came out with a Normandy focus. I’d be writing till the end of time. But I will list items I played and enjoyed that have a Normandy focus. I am also going to throw in some recommended reading for those wanting to play out D-Day on the tabletop.

I am not usually an area movement fan. It’s a bias of mine that I can’t quite put my finger on. But Breakout Normandy was one of those games I played over and over again. So you know it’s good. The game is tense from the initial landings right down to the end of the game. Many of the games I played had either side winning by a single victory point. The game uses the same impulse system that Avalon Hill used in Storm Over Arnhem, Thunder at Cassino, and Turning Point: Stalingrad, but this is the largest scale I’ve personally seen them use the system, and it works very well. Sadly, both versions of the game are out of print, but they can still be had on Boardgame Geek and ebay. Unfortunately, copies aren’t cheap. If you can find one for a good price, get it, this is a really good game.

I’ve spoken with the designer and played this game a couple of times with friends. This game does a very good job of capturing the view of the average German or American soldier in the hedgerows in the two months after the landings. The fighting was vicious and often close quarters, and this game does an excellent job of reflecting this and does it simply. If you’re a tactical game aficionado with an interest in D-Day and the aftermath, I’d pick this one up. Copies can be had for reasonable prices on BoardgameGeek and Amazon.

This game is one of those minor legends that, thankfully, Compass Games is bringing back in a Kickstarter. It covers the heavy fighting that the 29th Infantry Division took the brunt to take the all-important town of St. Lo, which was a major road junction. This provided a jumping-off point for the eventual American-led breakout. But the 29th bled badly for it. Joe Blakowski was the first game designer to do anything covering this battle. He even wrote a seminal work about the 29th from Normandy to St. Lo, and it would be excellent reading before you play this game. The game really makes you think about how to employ combined arms and how and when to use your battalions.

Admittedly, the game had some balance issues, especially in the victory conditions, but it doesn’t detract from a gem of a game. You can easily tire out your force and be vulnerable to your opponent. Trust me. I’ve done it. The rules are simple to learn, but the game isn’t easy to master. I haven’t managed it yet. Copies of the game are on the slightly expensive side, but as I said, the Kickstarter isn’t too much more, and I look forward to seeing what Compass Games did with the 2nd Edition.

On another note, this isn’t the only time Mr. Blakowski used the system. He re-used it in the game Omaha Beachhead, which I didn’t know about. I will be on the lookout for a copy in my travels.

Just about every World War II miniature rule has at least one book or supplement to do Normandy. Command Decision, Flames of War, Bolt Action, Rapid Fire, they’re all there. That said, I am going to talk about the ones I’ve actually played. Again, it’s a case of there is a ton out there, and nobody can play it all.

Come on readers, you knew Battlegroup was going to work its way in there somewhere. As I have said before, Battlegroup tends to be my go-to World War II miniatures system. It does what I want it to do simply, and I can do large or small battles depending on my mood. Battlegroup Overlord was a huge book. So huge they eventually had to make it two books. One is called Battlegroup Overlord, and the other, covering the fighting beyond the beaches, is called Battlegroup Overlord: Beyond the Beaches. There’s a lot to like about the book. It has incredibly detailed articles on German beach defenses and how they were laid out, using Omaha as a historical example. The books are pretty much useful until September of 1944, so you can do the entire campaign in France. And as it’s the same Battlegroup I am used to? It slots right into what I am seeking to do.

The books themselves are very well laid out. The graphic design is top-notch, and they are eminently readable. The eye candy is plain amazing, and while the books aren’t as cheap as one would like, you are getting real quality in what you pay for. Plastic Soldier Company still has both Overlord and Beyond the Beaches available in print. These are softcover editions, so be warned. My recommendation to US gamers is to get the books from the Naval Wargaming Store. He’s got both books available at a discounted price, which takes the bite out of the shipping from the UK.

Done by Warwick Kinrade before he did Battlegroup, this small-scale skirmish game does an exceptionally good job of reflecting the close in fighting in the Norman hedgerows and small villages. While the game was written initially for 54mm figures, the game works just as well with 28mm and 20mm. I rather like it as you can put out a squad each, put some hedgerows down, and have a particularly good, tense game. The game can be run in other theatres in the war, and has rules for Russians, but it really shines in Normandy. One note, Tanks and other ironmongery don’t figure a whole lot in these rules, and with good reasons. The ranges depicted are just too close.  I also like the fact that everything is percentile dice, which makes figuring odds a simple matter. Sadly, the rules are out of print, but they can be had for a decent price on Boardgame Geek.
Another fine product to look into, especially if you do skirmish games like Bolt Action and Chain of Command, are the Skirmish Campaigns books. They put out quite a few volumes set in Normandy.

What I love about these books is that they are decently priced, written for a variety of systems (and easily converted for many more), and impeccably researched and playtested. The books themselves may look like they came from the “80’s school of game design and presentation,” but you get a lot for your money. They’re also available from a variety of retailers  I would recommend these books highly.

In any event, I hope this gets people considering getting out there and gaming D-Day. And, as always, Good Gaming, Everyone.

Beyond the Beachhead, Joseph Blakowski, Stackpole Books, 1999 – If you only read one book about the Normandy Campaign, read this one. Mr. Blakowski brings many points of view to the discussion about the 29th Infantry Division in Normandy. Mr. Blakowski is an eminent military historian and wargame designer, and this book eventually launched a five-volume series on the 29th Infantry Division. Trust me, read this. It will change your view on D-Day.

Closing With the Enemy – How the GIs Fought the War in Europe 1944-45, Michael Doubler, University of Kansas Press, 1994 – Doubler’s book blows the doors of the previous scholarship that the US Army was “inept amateurs that only won through logistics and firepower.” If you still believe that, read this book. While it’s very weighty and uses a lot of professional milspeak, it’s quite a good book in describing how GIs learned on the job and still beat a German army that was hailed by some historians as “the best in the world.”

Six Armies in Normandy, John Keegan, 1994, Penguin Books – I’ve always loved Mr. Keegan’s works, and this was no exception. Mr. Keegan did an innovative look at one individual division from each of the five Allied armies in Normandy as well as their German opponents, and then used that to tell the story of the invasion. I love this book and am quite sad I lost my copy. But, I recommend it highly, even over Beevor, Ryan, and Ambrose.

(This article is credited to Jason Weiser. Jason is a long-time wargamer with published works in the Journal of the Society of Twentieth Century Wargamers; Miniature Wargames Magazine; and Wargames, Strategy, and Soldier.) “Done by Warwick Kinrade before he did Battlegroup, this small-scale skirmish game does an exceptionally good job of reflecting the close in fighting in the Norman hedgerows and small villages. While the game was written initially for 54mm figures, the game works just as well with 28mm and 20mm. I rather like it as you can put out a squad each, put some hedgerows down, and have a particularly good, tense game. The game can be run in other theatres in the war, and has rules for Russians, but it really shines in Normandy. One note, Tanks and other ironmongery don’t figure a whole lot in these rules, and with good reasons. The ranges depicted are just too close.  I also like the fact that everything is percentile dice, which makes figuring odds a simple matter. Sadly, the rules are out of print, but they can be had for a decent price on Boardgame Geek.”