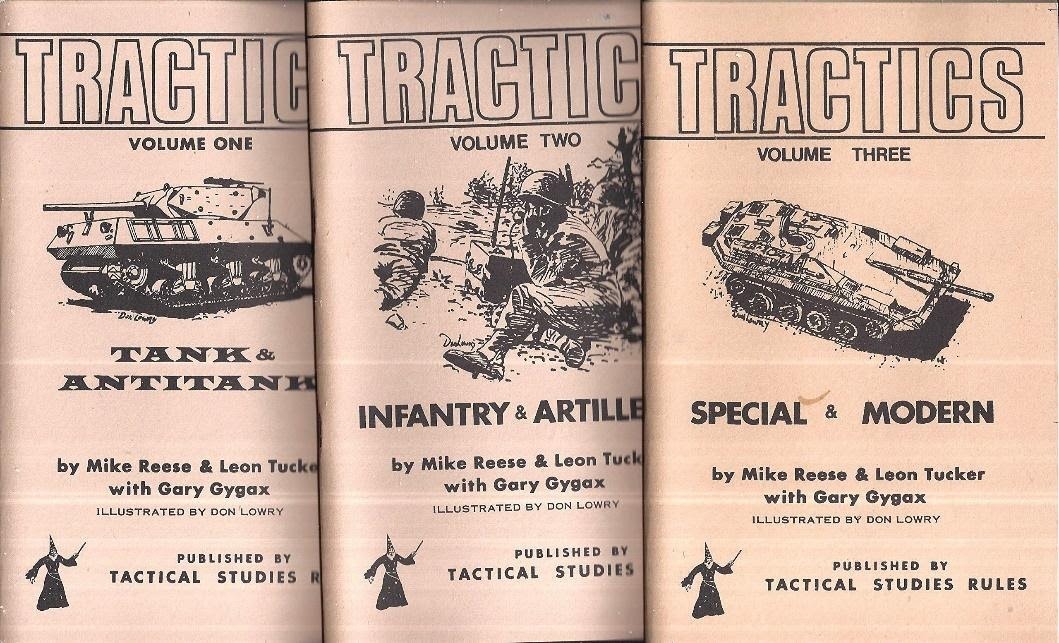 As any wargamer will tell you, you need some assembly of rules to run a game, and that’s no exception for any scale. The rules can be as simple as the “pew pew” we did as kids, or as advanced as, well, Tractics, which probably holds the champion’s slot for “Most Complicated World War II rules ever written!”

Yep, By the Same People Who Brought You D & D! Let us just say Gary Will Not Be Remembered for This One | Amazon.com

As time has gone on, the rules to play any scale have improved as design theory and practice have advanced. But everyone has their favorites. I certainly have mine, and I’ve played a lot of rules over the years. Soldat, Men Under Fire, Nuts, Battalions in Crisis, Battlegroup, Command Decision, Rapid Fire, I Ain’t Been Shot, Mum, Chain of Command - The list goes on and on. But we’re going to look at four rule sets today I think work particularly well with 20mm as a scale, and I am going to say why they do. So, let’s depart on the last part of our journey and take a trip into what are, to me, some pretty good rules to play in the scale.

Battlegroup is just one of those games that works. The core processes are simple, easy to understand, and all run with six-sided dice (We’ll call them D6 from now on). The best part of Battlegroup? While there are army lists (Battlegroup did begin life as Kampfgruppe Normandy, a Games Workshop product), they don’t dominate the game, nor do they make it impossible to play without them. You can do historical scenarios of any size, as the game is scalable everywhere from squad to battalion level.

Just adjust your order dice and BR rolls accordingly, and away you go. What’s really great about it? The level of support the game has. You have a Facebook page, a Discord server, and three Dispatches newsletters out there to cover the eight theatre books (with more coming!) and three scenario books, as well as the main rules don’t cover. Piers Brand and Warwick Kinrade have done a fine job not just putting the rules out but supporting them to the degree they have. Are there flaws in the rules? There are some, as I’m not always a big fan of the artillery resolution system. Sometimes, I wish it had a flow chart, but they’ve done a lot to improve the game, and I am again happy to play this game over and over again. The core of the rules are the orders and actions, roll your # of orders, execute them, and when you’re done, it’s the other guy’s turn. It can’t get any easier.

So why are these rules great for 20mm? Because these rules were written for 20mm! Piers and Warwick make no secret they are 20mm partisans and have written Battlegroup to be the rules they want to play. Not to mention, Battlegroup stars a ton of 20mm eye candy meant to inspire any of us out there to be better modelers and painters. So, if you play 20mm, why wouldn’t you play these rules?

This game has quite the following in the UK, and it’s the granddaddy of the Fast Play Movement of wargames where the effect is more a thing than process, which is something I appreciate. That said, I always found Rapid Fire a bit too abstract for my taste. That and figuring out the orders of battle made no sense to me (8 figures to represent a company of 120-150 men?) It’s probably for these reasons that the game didn’t catch on in the States. I also think everything Rapid Fire does? Battlegroup does it better. But that’s not to say I don’t recommend it. It’s a very good game when you want a simple set of rules to a very large game. I’ve seen these rules adapted to a variety of 20th Century conflicts, and it does this quite well.

So why choose these rules for 20mm? Because, like Battlegroup, Rapid Fire is structured and designed for 20mm. It’s just a solid set of rules for what it does, and most importantly, it plays fast and gives a good result.

Command Decision is a game that gave rise to a whole generation of games in the 20th Century where one stand of troops represented a platoon, or a single model tank represented a platoon. I will admit, at first, I only thought the concept worked in 6mm (I’m still not rebasing my 20mm to play this or any other multi-base game!). This is a concept that wasn’t new to wargaming, but it was to 20th Century conflicts, as the idea of a stand being more of a concept for gaming 19th Century or earlier concepts. But Command Decision was revolutionary for its time, and it was designed for 20mm figures. Yes, the order system is a bit clunky by modern standards, and the firing system could use some improvement. Still, all in all, it works for what it’s designed to do, which is provide a game where you can simulate a brigade or division in contact and actually play the game to a conclusion.

So why does it work for 20mm? Well, having had a chance to play it back when I lived in NYC and gamed at the venerable Brooklyn-based Metropolitan Wargamers, I can say that their North Africa games made me a believer. If you want a game with many tanks and in 20mm, you can build a lot if you’re not careful, then this game can handle it and handle it well. The game also works off 10-sided dice, which makes percentage calculations easier. I also think GDW was rather taken with the idea of 10-sided dice for a lot of their designs. That said, the game has quite a few followers, as it’s now on its fourth edition through Test of Battle Games. So, if you like big battles with a bit of crunch, give this game a try. It’s got quite the following on Facebook and its own message board.

Chain of Command is probably one of the most innovative wargaming designs to come out in a long time. It’s a very good set of platoon-level rules that reflects the problems a platoon leader has at the tactical level, and it does so in a unique and innovative way. My one problem with the rules? Finding someone where I live who wants to play them. Too Fat Lardies, as a company, has for many years gone with unique card-based activation systems. Now, while this is seen by many as a good thing, American wargamers tend to have a prejudice, rightly or wrongly, against card-based initiative systems. To me, that’s a shame, and I’ve been trying to find ways to deal with the issues one finds with card-based systems in my own rules writing, but enough of that. We’re talking about Chain of Command.

Chain of Command works off a unique idea of “order dice” in which you roll to see whether you get to move something, what you get to move, or if something random happens, or the turn ends. Personally, I like it better than cards. The game’s “patrolling” system is also an awesome idea, with the idea of “Jump Off Points” being a means to get forces into positions to get the game rolling quickly and not let a single scenario get stale. I also like the fact that Too Fat Lardies supports Chain of Command. They do so through a variety of campaigns, articles in their Lard Magazine, and tons of free downloads. I like companies that do this. The more support a game gets, the more the game thrives.

So why 20mm with this game? Because this is the way I first started playing 20mm. I loved doing two platoons in contact fighting it out over an abandoned farm or village in some forgotten sector of the front. I used railway terrain, dime-store lichen, and felt for terrain. I had Roco Minitanks for armor, and 1/72 plastic figures. And I had a good time. Chain of Command is, in many ways, a throwback to that type of gaming, and I’d like to play it more often! 20mm is designed first and foremost for this sort of gaming.

Don’t let my conclusion be the be-all, end-all of what wargame rules you try in any scale. Find a set of rules that reflects you and the gaming you want to engage in. And don’t hesitate to make a rule set yours by tinkering with it if there’s something you think you can do better. Once you’ve bought the game, it’s yours to do with as you please.

Whatever you do, remember the rasion d’ etre of wargaming: To have fun!