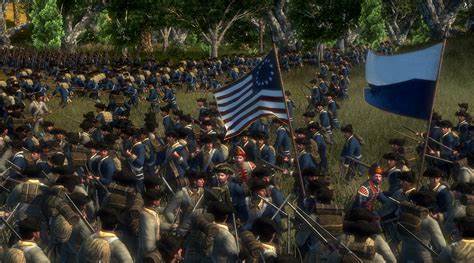 While many Americans today may associate the Fourth of July with fireworks and barbecuing with family and friends, the origins of this long-celebrated holiday started with the day the United States gained its independence. Those who want to celebrate the Fourth of July a bit differently may be interested to know that there are a handful of great video games that cover the subject of the colonies’ freedom from the British.

Here are five great historical video games that cover the start of a nation and the conflicts responsible for it.

The Total War series has long been known for its excellent gameplay that blends both real-time strategy and turn-based gameplay. Empire: Total War takes the series to the 18th-century, with the American Revolution serving as one of the several historical events that players can experience. This game is perfect for massive American Revolution fans as players can choose to play as either the Americans, the British, or various other nations and recreate famous battles. Choose your side and rewrite history or try to recreate the infamous conflicts in an experience that greatly details the liberation of the 13 colonies.

No Man’s Land: Fight for Your Rights

Fancy a more old-school real-time strategy game? Then look no further than No Man’s Land: Fight for Your Rights. Playing and looking quite similar to the Age of Empires series, this strategy game features classic RTS gameplay where players build their home bases, manage resources and units, and wage war against enemy armies. Players can choose between playing as the English, Spanish, Native American, or American Settlers, with a lengthy campaign mode as well as an online multiplayer mode. The game, though released way back in 2003, is still good fun and is perfect for classic RTS fans looking for a unique way to celebrate the Fourth of July.

Fans of classic turned-based strategy games should take a look at Liberty or Death, a strategy title focusing on the American Revolutionary War. Originally released on PC, Sega Genesis, and Super Nintendo in 1993, Liberty or Death was created by Japanese developer Koei as part of their Historical Simulation Series. This included other historical titles like Nobunaga’s Ambition and Romance of the Three Kingdoms. Liberty or Death features similar gameplay as Koei’s other strategy games from the late ’80s and early ’90s, where the player must manage America’s resources, plan battle strategies, and engage in combat. The game has a steep learning curve and features zero hand-holding, but if you’re a big history buff, then this retro strategy game might be worth checking out.

The oldest game on this list, Sons of Liberty was released for the Apple II, Atari 8-bit, Commodore 64, and DOS in 1987. Fans of early-era gaming might want to take a look at this game, which features grid-based battle gameplay as well as some text-based strategy. The game is set during the American War for Independence, where the player fights through three major battles: The Battle of Bunker Hill, Battle of Monmouth, and Saratoga, where the player can choose to fight as either the American or British armies. The game even supports two-player multiplayer, which was somewhat uncommon at the time of its release. While the title is incredibly dated compared to modern gaming standards, it might be worth checking out if you’re a big fan of old-school titles and American history.

While Assassin’s Creed II and Assassin’s Creed IV: Black Flag are considered two of the best entries into the long-running series, Assassin’s Creed 3 received somewhat mixed reviews upon its release. For one, the series strayed from the beloved protagonist Ezio Auditore who starred in the three prior games. Additionally, the game felt different from other titles because it took place on American soil instead of European.

But for fans of American history, Assassin’s Creed 3 is an absolute blast to play. The game brings the world of early America to life in a large open world where players can freely explore at their own pace. Much of the enjoyment found within Assassin’s Creed 3 comes from the rich amount of detail featured within the world, including famous landmarks and historical figures like Benjamin Franklin, Thomas Jefferson, and Paul Revere. The game still remains the only modern AAA action-adventure game that takes place during the American Revolution, so for that reason alone, massive fans of American history owe it to themselves to give this game a try.

Overall, there aren’t many games that cover the American Revolution, but there are still enough options out there to satisfy most gamer’s tastes. If you’re looking to celebrate American Independence a bit differently this year, then maybe consider checking out one of these games.