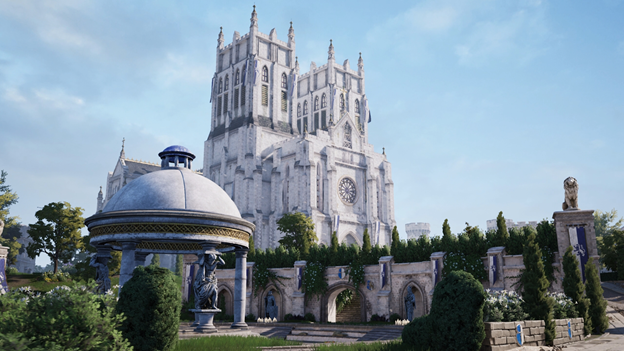 A new map and game mode have recently been leaked for Chivalry 2, a relatively new medieval action multiplayer. In developer Torn Banner Studios’ post-launch dev diary, it revealed that the new map would be Galencourt, the seat of the Agathian Church. Galencourt is a massive city with lavish medieval architecture, providing players ample space for offense and defense. Alongside the map, a team objective mode will be included.

Galencourt brings a massive battlefield within and beyond its walls. Everything from the historically inspired design to the brutal combat is remaining but will be accompanied by a few unique additions. Destroyable ships are docked at the map’s port, available for players to man or destroy. If players wish to proceed on foot with their brethren, new weapons and a mounted fighting style will be added in to give that edge in battle.

Looking ahead through the update’s numerous tweaks and additions, the new game mode will include objectives for players to contest. While information is low on what this game mode will be, players can expect an enjoyable, highly competitive scenario to explore. Rumored horses, modes, and interface improvements have also been promised by the developers. These will be in Chivalry 2 sometime after this content update’s release. Features like those recently revealed expand on what this game borrows from medieval history, with first-hand immersion always prevalent in ever-changing experience.

Developer Torn Banner Studios created a strong multiplayer action game and earned praise from fans and critics alike. The new update will not be the last for the future of Chivalry 2. Unannounced maps, character customization, and constant improvements will be there. Players can look ahead for more to come for the title in the coming months.

At Epoch XP, we specialize in creating compelling narratives and provide research to give your game the kind of details that engage your players and create a resonant world they want to spend time in. If you are interested in learning more about our gaming research services, contact the team at Epoch XP today!