The History of the Survival Horror Genre 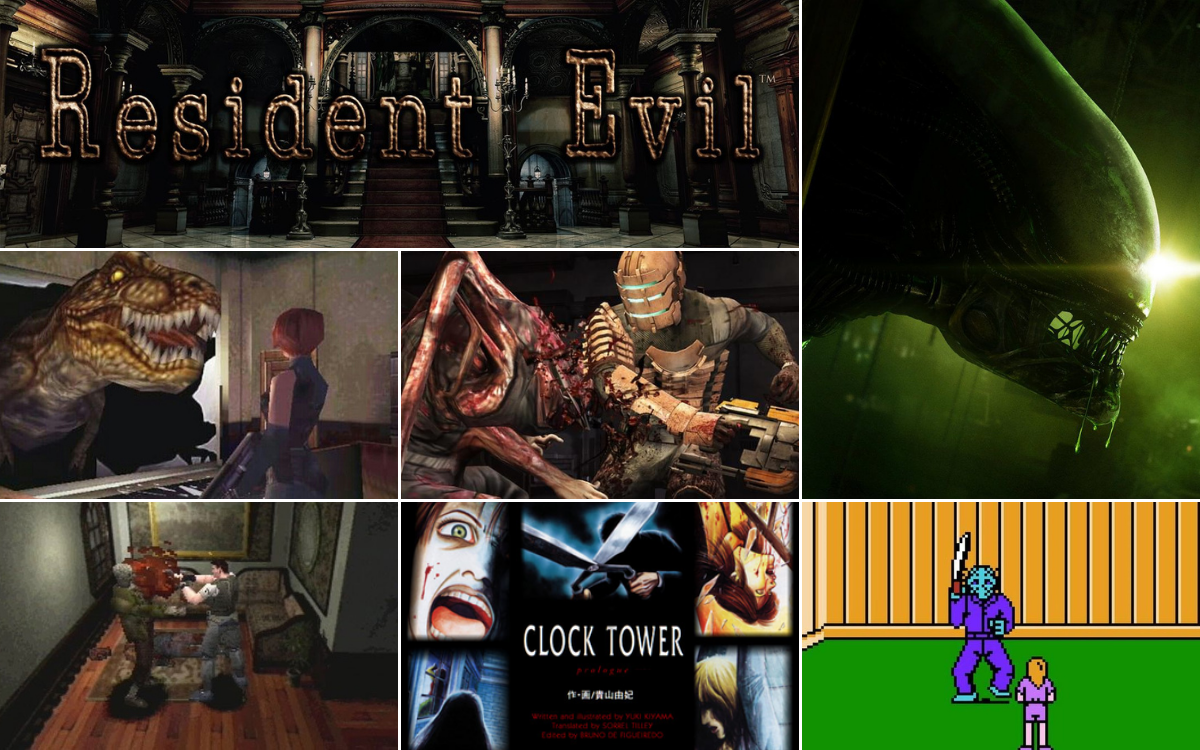 It started with a question of curiosity – “What was your introduction to the survival horror genre?”

It simply intrigues me to see where players received their first glimpse of a genre. When I put the question out onto Twitter, I never expected it to lead into a deep dive into the genre’s history. However, two of the answers I received made me realize a discrepancy in the known timeline of survival horror.

Much like myself (and I’m sure many others), former game guide author Dan Birlew first experienced the genre with the sprawling Spencer mansion of Resident Evil (1996). As he explained, “Resident Evil: Director’s Cut was my first survival horror game. It’s the first time a game made tensions mount and my pulse rise while I was walking down a corridor, not sure what would pop out at me in the next camera angle. There were jump scares and also creepiness galore, and I was so impressed that a horror game was finally making me afraid… and I was immediately hooked.”

But then I received two more responses. The first was from Mikael Kasurinen, director of Control (2019) and Alan Wake (2010) designer, who said:

And that’s when it hit me.

Capcom may have coined “survival horror,” but as we’ll see in this exploration of the genre’s history, Resident Evil was merely a popular pioneer for a type of game that had already existed for more than a decade.

The 80s and the Age of Interactive Horror

Nestled somewhere in that extensive timeline is Mystery House (1980), an adventure game developed by On-Line Systems (which would later become Sierra Entertainment). Today, few people would consider Mystery House scary, but the murderous events and scattered dead bodies do offer a taste of the genre. Around the same time, players were enjoying the horror-speckled murder-mystery title, another game was garnering attention – and being loosely based on an Edgar Allen Poe story, it’s hard not to see the horror influences behind the Apple II’s House of Usher (1980).

What’s so intriguing about Mystery House and House of Usher is that they weren’t marketed as horror experiences. The latter was dubbed an RPG, though it featured elements we see today in survival horror. The protagonist had a courage meter and was surrounded by mummies, hatchet-wielding killers, corpses, and other staples of the modern genre. But it didn’t fall into the horror category until many years later, and it wasn’t until 1982 that Atari released the first game to be actively marketed as a horror game – Haunted House. Sometimes considered the “original horror game,” Haunted House may not look like much, but it forced players to consider inventory management as they navigated the pitch-black home of Zachary Graves.

Atari may have introduced players to horror, but the mid- to late-80s really gave the genre steam, especially as developers shifted toward gothic horror and borrowing from other intellectual properties. Castlevania may not be scary, but its castle setting and supernatural fiends were deeply rooted in the genre. Other games like The Evil Dead (1984), Texas Chainsaw Massacre (1983), Frankenstein’s Monster (1983), Friday the 13th (1989), Halloween (1983), and Zombi (1986) showed promise of what the future held, but it was a1989 RPG that really laid the groundwork for the survival horror genre.

In 1989, director Kiyoshi Kurosawa released Sweet Home, a Japanese horror movie that follows a film crew as it explores the inner workings of an abandoned mansion. Sprinkle in a poltergeist and a supernatural mystery, and you have the basic premise of the movie that inspired the game that eventually gave life to Resident Evil. The horror RPG, also developed by Capcom, thrust players into a mansion riddled with supernatural terrors. Zombies, specters, and all manner of ghastly horrors threatened the sanctity of the hapless heroes throughout the sprawling manor. Sound a little familiar?

According to Sweet Home’s video game director, Tokuro Fujiwara, Resident Evil was his opportunity to do all the things he wanted to do in the original Sweet Home but couldn’t due to graphical and technical limitations. In fact, the Shinji Mikami-director survival horror title was intended to be a Sweet Home remake, but a rights issue forced Capcom’s hand. That didn’t stop the development team from borrowing elements from the 80’s RPG to flesh out the zombie romp in the Arklay Mountains.

Item management, puzzles, dreaded backtracking, character-specific items, and even the mansion setting were all siphoned from Sweet Home to build a better, more expansive horror experience. With the tech of the original PlayStation, Fujiwara would finally be able to recreate the success of Sweet Home with a visually horrifying game. But it was Mikami that spent the initial months of development sketching concepts and envisioning the final product, and it actually wasn’t Sweet Home that drove him to include one of Resident Evil’s most striking features.

In its earliest stages, Resident Evil was intended to be a first-person video game. Then Mikami happened upon Infogrames Alone in the Dark (1992), a thriller that blends the dreary tones of Edgar Allan Poe with the cosmic horrors of H. P. Lovecraft. Today, it’s known as the first 3D survival horror game, but it was just another horror adventure when it first released. Alone in the Dark had everything going for it – a creepy setting, a unique art style, solid combat, and a story that did its inspirations proud. However, it was lacking one thing it needed to shine and earn recognition as the true dawn of the survival horror genre, and that was name power.

When Infogrames released Alone in the Dark, it didn’t do so with a long history of successful releases. In fact, by 1992, the development team hadn’t really done anything even marginally stellar. Capcom, on the other hand, was knee-deep in classics. They may not have been in the realm of horror, but it was impossible to navigate the gaming industry and not come across a well-received Capcom-developed title.

Couple that with the gut reaction some players may have had toward Poe and Lovecraft’s heavier works, both known for their intricate and profound themes, and you have the makings of a game that deserved the spotlight but couldn’t quite muster the same star power as Resident Evil. The 1996 title didn’t suffer the same fate and instead quickly became the best-selling PlayStation game shortly after its release.

Resident Evil’s commercial success indicated that there was an untapped market for survival horror video games, and so the late-90s became a treasure trove of memorable launches. In 1998, Square, already known for its Final Fantasy series, released Parasite Eve, a horror-RPG based on the 1995 Japanese novel of the same name. Though focused more on the action-RPG elements, Parasite Eve borrowed from the newly defined survival horror genre.

A year later, Konami released the first entry in a series that, like Alone in the Dark, put a heavy emphasis on atmosphere. Unlike Parasite Eve, Silent Hill made no qualms about being a horror game. From the look and feel of the foggy town to the hellish monsters that called it home, Konami took video game horror a step further than Capcom. With minimal lighting and sparce resources, players guided an “everyman” through a twisted tale backed by the jarring and haunting sounds of composer Akira Yamaoka.

The 90s continued to bring the scares with games like Dino Crisis (1999), Clock Tower (1995) and its sequel Clock Tower II (1996), Countdown Vampires (1999), Nocturne (1999), and many more. Of course, the genre didn’t just fizzle out come the new millennium. On the contrary, many of the series bred during the influx of 90s survival horror continued to thrive, paving the way for all-new franchises to take shape and expand upon the definition of “survival horror.”

Modern Horror and the Expansion of the Genre

Throughout the 21st century, Resident Evil and Silent Hill continued to dominate the horror market, but they weren’t without competition. The first few years after the turn of the century introduced players to now-forgotten gems like the trilogy of games based on The Blair Witch Project (2000), a resurgence of Alone in the Dark, and an atmospheric iteration of The Evil Dead (2000). In 2001, the Fatal Frame series entered the fray, bringing with it supernatural horrors that put Capcom’s zombies to shame.

Developers were getting smarter and started to realize that the tried-and-true formula of Resident Evil could only appease gamers for so long. Even Capcom aimed to branch out, using series like Onimusha (2001) and one-offs like Haunting Ground (2005) to expand its horror repertoire. Silicon Knights’ Eternal Darkness: Sanity’s Requiem (2002)borrowed gameplay mechanics from Resident Evil but crafted a new style of survival horror that focused on the human psyche. Manhunt (2003) from Rockstar tossed out the undead foe in favor of human terrors and grounded the genre in reality.

While Resident Evil’s classic camera angle carried the genre for a spell, Capcom returned in 2005 with a groundbreaking alteration. With the angle shifted behind Leon S. Kennedy in Resident Evil 4, players could become more immersed in the horrors unfolding in front of (and behind) them. It revitalized the series and allowed the development team to integrate action elements, but also greatly influenced a project brewing in the creative minds at Electronic Arts.

Everyone had something new to add to the genre, but in 2008, body horror took center stage with Dead Space. Visceral Games transported players out into the depths of the universe to combat a resilient enemy that needed more than just a well-placed headshot to take down. Necromorphs became the scariest thing in gaming, popping out of vents and floorboards of the USG Ishimura in a game that embodied the best parts of Resident Evil, Alien (1979), The Thing (1982), and even touches of Lovecraft themes. Its faster pace proved that horror and action could reside in the same space, which became a core component of survival horror as the years went on. However, for players still pining for that feeling of helplessness often found in early survival horror, Frictional Games delivered Amnesia: The Dark Descent (2010).

Amnesia spurred a new trope of survival horror – the unarmed protagonist. It’s become a driving force for so many AAA modern horror titles, including Outlast (2013) and Alien: Isolation (2014), and is heavily prevalent in indie-developed titles. Developers continue to prove that there is still much to be done with the genre, especially as we see advancements in tech like virtual reality becoming common in the average household.

As we can see in tracing the history of survival horror, the genre is ever-evolving. Who knows what grizzly frights will be thrown our way next.

At SJR Research, we specialize in creating compelling narratives and provide research to give your game the kind of details that engage your players and create a resonant world they want to spend time in. If you are interested in learning more about our gaming research services, you can browse SJR Research’s service on our site at SJR Research.