Why Do Video Games Often Turn Hitler into a Caricature? 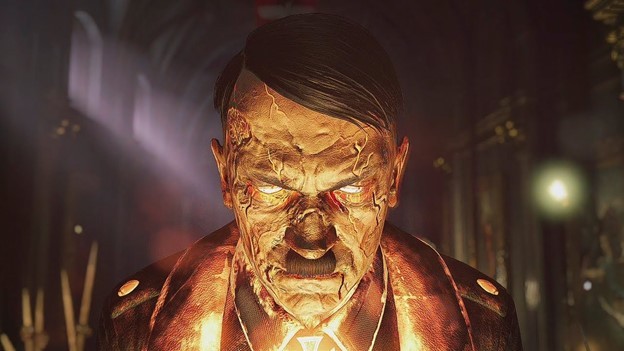 Many developers would argue that one of the most important elements to a successful video game is having a great antagonist. Without a formidable opponent to face off against, the hero has no reason to exist. Some of the greatest video games of all time feature iconic baddies, including Bowser from the Super Mario series, Sephiroth from Final Fantasy VII, and Ganon from The Legend of Zelda.

But when it comes to video games based on real-world events, things can sometimes get a bit more complicated. Just like the actual histories that they’re inspired by, historical video games often don’t have clear heroes and villains. But those historical video games that choose to follow a more narrative arc require some sort of ultimate villain that the player must face. While the definition of what makes a villain in the real world is up for interpretation, there are a few historical figures that have earned their title as true villains. Adolf Hitler is arguably the biggest and most recognizable villain from the past hundred years, and as a result has been a staple villain of digital World War II scenarios. But how does one portray the human embodiment of evil? As some developers may have us believing, the more ridiculous the depiction, the better.

Becoming the Face of Evil

One could argue that World War II was the last war that really felt black-and-white in terms of who the “good guys” and the “bad guys” were. Adolf Hitler and the Third Reich have been seen largely as the ultimate villains of World War II, having committed genocide and mass murder while fueling the biggest war of the past century. As a result, it makes perfect sense that there are so many video games set during World War II – the Nazis are iconic, recognizable symbols of evil and Hitler was their leader. The average person–gamer or not–recognizes the Nazis and understands what they stand for, so for that reason they make perfect villains for a historically based video game.

Hitler has been portrayed in countless video games, usually as some sort of ultimate evil, and Bionic Commando on the NES (which was even originally titled Hitler’s Resurrection: Top Secret) was one of the earliest video games that featured him as the primary antagonist. Hitler steps in as the game’s final boss, right after successfully getting resurrected by his Nazi followers. In the final fight against him, Hitler controls a giant aircraft that the player must destroy via a self-destruction sequence and escape from before it detonates. Appearing more like a supernatural being than an actual human man in the title, Hitler’s portrayal in Bionic Commando is done to give the game a thrilling and exciting ending.

Probably the most famous out of all of the games that he’s appeared in, Wolfenstein 3D also features the most outlandish and cartoonish portrayal of the former ruler of Germany. Adolf Hitler- or mecha-Hitler – is the main antagonist of the Wolfenstein series and appears as the final boss in the 1992 original. Armed with full robotic battle armor and machine guns, Hitler better resembles a Transformer than he does an actual historical figure. And this portrayal is certainly a fun one. There are few other game endings that feel as satisfying as this one, as you can’t help but feel good after defeating a giant, hulking robo-Hitler.

Hitler has continued to appear in video games in the past decade, with his most notable recent appearance being in Zombie Army 4: Dead War. The Zombie Army series is a franchise set in a world where the Nazis have returned from the dead and even features a demonic version of the German Chancelor. This portrayal is perhaps the most extreme one yet, as Hitler becomes a literal monster with the power of controlling the undead and starts the apocalypse.

Hitler has made many other interesting appearances in various other games, but it’s important to ask ourselves whether these exaggerated portrayals are harmful or not. While Hitler was a horrible person that deserves the title of “villain,” it makes sense on a surface level why he has appeared so often in games. But on the other hand, by giving Hitler the spotlight so frequently in video games, we’re giving him the attention that the real Hitler would have wanted. Hitler’s frequent appearances within gaming start to become problematic when we start separating Hitler the man from Hitler the caricature. Perhaps it’s time that we stop giving Adolf Hitler so much attention in games and focus ours on other things that are more deserving.